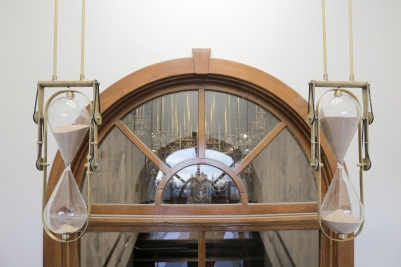 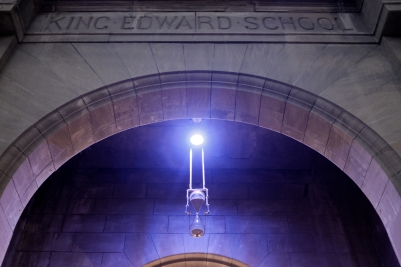 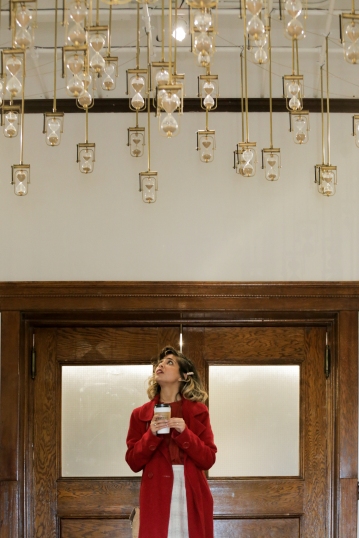 First conceived in response to a Call for Public Art in 2016, Yesterday, Today, Tomorrow is a site-specific art installation visualizing the complex passage of time as it relates to the historic King Edward School in Calgary. 105 hourglasses are suspended overhead – one for each year from the building’s construction in 1912 until it reopened as cSPACE King Edward in 2017.

Speaking to the difference between time as a pragmatic measurement (Chronos) and time as an experience (Kairos), half the hourglasses measure universal time like a clock, and half measure personal increments of time collected through a public Time Gathering. Ranging from “THE TIME IT TAKES TO: call mom” to “THE TIME IT TAKES TO: realize it was just a dream and you are no longer lying next to me,” you can read the brass tags attached to various hourglasses to understand the increment of time being measured in sand.

The hourglasses are filled with sand crushed from sandstone bricks collected during cSPACE’s renovations. Smashed, ground, sifted, mixed, and measured into each hand-blown hourglass, the sand tracks 0 seconds to 4 hours in hourglasses measuring 5 inches to 2 feet in height. Every few seconds, different hourglasses flip mathematically, controlled by motors, sensors, and microcomputers. An internal clock uses GPS to ensure the hourglasses flip on schedule, regardless of power outages or electrical issues. At noon and midnight every day, all hourglasses flip in a wave passing through the entrance.

Viewers who frequent the space will eventually learn to read these movements as the ticking of an intricate clock, mapping universal time in relation to abstract, personal measurements of time. Yesterday, Today, Tomorrow uses the hourglass as a symbol of non-linear time – both mortal and immortal – drawing a relationship between the sandstone school’s past, transitional present, and the uncertain future yet to come.

Yesterday, Today, Tomorrow is included in the permanent collection of the Alberta Foundation for the Arts. This artwork was commissioned from artists Lane Shordee, Caitlind r.c. Brown, and Wayne Garrett, one of three finalist teams winning an open call to Alberta artists. The commission was awarded by the Alberta Foundation for the Arts in partnership with the cSPACE Projects through the City of Calgary 1% Public Art Policy for long-term display in the historic entrance of cSPACE King Edward in Calgary, Canada.

Two other public art commissions were awarded, one to daniel j. kirk & Katie Green, and  the other to Lane Shordee, Caitlind r.c. Brown & Wayne Garrett (via an independent jury) for long-term display at cSPACE King Edward.

DOCUMENTARY  Dane Ulsifer, with thanks to Lewis Liski, Gillian McKercher, and Guillaume Carlier